Strap in, kids, because it’s time for the second installment of Extreme Pinterest Writing Prompts, what has now become a series here on the Atlas Blog. Previously on EPWP, I wrote 100-word creative writing blurbs based on a Pinterest writing prompt I dug up from my archives.

This time around, however, we’re raising the stakes. I’m still keeping myself self to the 100 words or less mark. This time, however, instead of me choosing my own prompts, I’ve given my friends and family the authority to choose the prompts for me. I won’t get to see what they’ve chosen for me until it comes time to write.

What you’re reading here is the raw, unedited—well, copyedited because I love me some good grammar—versions of these pieces. If you’d like to try this out for yourself, try out the prompts below, or check out some others on Pinterest. Alright, here we go…

Chosen by my suitemate Maddy:

It was as if someone muted the world, turning the volume all the way down. Not even a stray note escaping. The wedding bells had died like birds shot in the middle of signing a note.

The bride lay on the dance floor, foam oozing from her mouth. The color of her spit matched her cream-colored dress. Family and friends surrounded her.

I locked eyes with the groom, who stood to the side, trying to wipe the guilty look from his face.

Not his fault. He was the means to an end. I picked up my scythe and drifted away.

Chosen by my suitemate Katie: 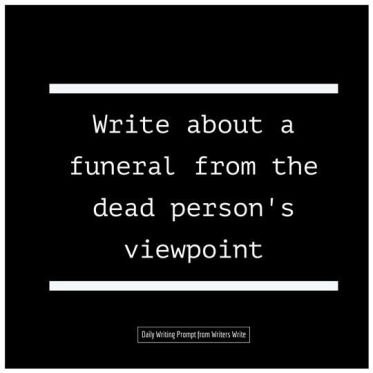 They put me in the purple pantsuit? I know I told my son once that I wanted to be buried in the blue suit. I should’ve known he wouldn’t relay that information.

Oh god. They’re really singing that song? What was it again? Ah, yes, “Table of Plenty.” I always hated that one. It’s like my own family doesn’t even know me at all.

And they put a picture of my husband in here with me. I thought I could escape him in death, but I guess not. Nice guy and all, but he never cleaned off the mustard cap.

Chosen by my psychology buddy Victor:

The world did not end in a bang,

one scream at a time.

A choir of broken voices came together as one,

and sang the hymn of apocalypse,

that rang through the smoke

Just when you thought they would go silent,

another cry shredded the quiet,

of the demolished victims lying on the ground

I stand among the ashes of friends and foes alike,

and I wonder if I made the right decisions.

Will my crimes come for me like ghosts in the night,

their whispers and screams ending my world with a bang.

Chosen by my wonderful mother: 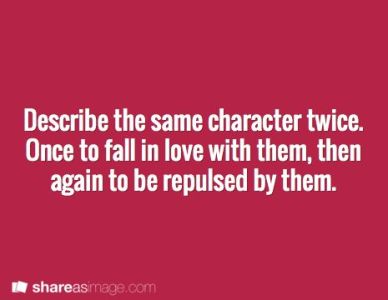 His eyes are two different colors, at least when the light hits them. One looks bright blue, the other a pale shade of green. It’s the little details that count with him, that make him unique. There’re the small tattoos that loop around his fingers, the freckles that dusted his shoulders. There’re the callouses on his fingers from when he plays his guitar, or when he stays at the gun range for too long. Then there’re the calls he gets from unknown numbers, and tiny blood spatters I find on his shirts.

It’s the little things that scare me.

Chosen by the ladies of the Atlas Blog:

When the old man died, I stole that stereo. Now I’m the one who sings.

I really surprised myself with this round of prompts. Not only do I think I rose to the challenge, but I also managed to write a freaking poem. My poems usually never see the light of day because their cringiness levels are off the charts, but here I am airing my soul to you all. Thank you to all those who picked out prompts for me, you definitely made my job difficult, but in a good way.

This concludes part two of Extreme Pinterest Writing Prompts. Thanks for tuning in, see you next time! Write your little hearts out, my fellow Pinterest addicts.