I find that a majority of my life-changing, though-altering, “big-bang” moments have happened after reading a book that has struck a particular chord with me. Honestly, I’m not even sure where I would be in my life right now if it weren’t for reading the books on this list. I don’t mean in a geographical sense, because I’m a home-body and where else would I be but inside my house, probably reading a book. #Bookworm4lyfe.

I mean the above statement in a more metaphysical way. Maybe the story has changed my outlook on something in society; maybe it’s empowered me in some way; or, maybe, it’s made me feel a little less alone in this journey we call life. Whatever the case, the following stories have brought me quite a lot of joy in my life, and I wish to share them with you all in the hopes that maybe they’ll help you, too.

Here are the books that have changed my life, in chronological order of when I read them:

The Outsiders by S.E. Hinton

This is by far, 100% my favorite book of all time. It’s the story of Ponyboy, a teenager growing up as a Greaser (someone usually part of the lower class—think Danny Zuko from Grease) in the 1960s, as he and his friends navigate through adversity and ephemeral moments of happiness. The primary tension of the novel comes from the ever-growing rivalry between the Greaser and the Socs, the members of the upper-class of society. Reading this in school as an unpopular seventh grader going through friend troubles and bullying, I felt like I had friends in these characters. They were underdogs just like me, so it was comforting to know that I could find solace in the pages of their story. This book also helped me to recognize that there actually wasn’t much of a difference between me and the popular kids after all; they were going through their own struggles as well, just trying to make it as much as I was. Stay gold, Ponyboy. Stay gold.

The Catcher in the Rye by JD Salinger

If you weren’t forced to read this in high school, Catcher follows Holden Caulfield and the adventures he goes on after he’s expelled from yet another fancy prep school. Along the way, he visits his little sister at home, orders a stripper, and wears a red hunting hat. It’s not as weird as it sounds, I promise. I read this book on my own, just before the start of freshman year of high school. Within the first few pages, I was hooked—I found Holden to be funny, endearing, and on the whole, raw and relatable. He doesn’t pull any punches in this narrative. It was only later, when I actually started high school, that I realized just how important this book was to me. Throughout high school, I started to develop some depressed feelings and instantly thought back to Holden’s own experience with depression. Catcher gave me the strength to get through these moments and find the light of life, just as Holden does throughout the story. Even things as smalls as ducks in a pond can be a source of hope in this world.

How I Live Now by Meg Rosoff

A badass lady for the win! Main character Daisy goes to live with relatives she’s never met before in England. She finds herself in the middle of a war zone, in which she must battle to survive.  I’m a sucker for a good dystopian novel, so this fit the bill even before I started reading it. I instantly connected with Daisy; she’s just a year older than I was at the time of reading this. She was everything I wanted to be: confident, collected, and courageous. Throughout the story, she “fakes it ‘til she makes it,” and becomes a strong hero by throwing herself into things and coming out on top. She’s unafraid and unshaken, and that’s everything I desired. So, after reading this story, I resolved I was going to do the same thing: just fake being confident until I was confident. I truly believe I am the strong woman I am today in part because of this story. Daisy became one of my ultimate role-models, and I still keep her with me in my heart to this day. 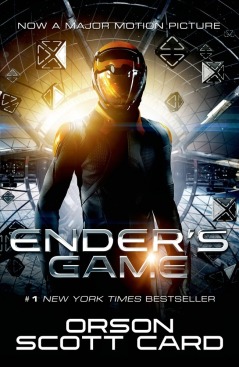 School also introduced me to this book. Whiz-kid Ender Wiggin is recruited as a little boy to fight for Earth’s International Fleet to fight against the “buggers,” the alien villains of the story. Throughout, he makes few friends, many enemies, and becomes a key figure in the hopes to win the intergalactic war. Funnily enough, the first time I read this book in eighth grade, I absolutely hated it. I’m pretty sure I never even finished it the first time around. However, something pushed me to pick it back up a couple years later—and I’m glad I did. This book furthered my desire to write science-fiction stories. After reading Ender’s Game, I started brainstorming for myself how our society might technologically and scientifically advance in the future. If it weren’t for Ender’s Game turning me on to the world of science fiction novels, I’d probably still be writing that awful story about a girl who meets a ghost in a church. Thank you, Catholic school.

Ready Player One by Ernest Cline

If you like 80s nostalgia and/or video games, this is the book for you. The story takes place in 2044, in which people escape to the OASIS, a virtual-reality world full of 80s-themes puzzles and adventures. Main character Wade Watts, aka Parzival, searches the OASIS for clues as to the location of an Easter Egg that will award him the OASIS’s creator’s fortune. When I was in middle school and high school, I was considered “weird” and “boyish” for being a girl who played video games and was into “nerdy” things like superheroes and Star Wars. Reading this book (in which one of the main characters is a female video gamer), I realized those people who thought that of me were just plain wrong. I learned that being a girl who plays video games is nothing to be ashamed of—in fact, it’s pretty freaking cool.

Harry Potter and the Deathly Hallows by JK Rowling

Yes, I only just read the final Harry Potter book earlier this year. Look, I had a lot of other books on my list beforehand, don’t judge me. If you’ve been living under a rock the past eleven years, this is the final book in the Harry Potter series, in which Harry and his friends engage in a final, decisive battle against Lord Voldemort and his followers that determines the fate of both wizarding and human society. While I am a true Potterhead (I have a phoenix tattooed on me, for crying out loud), finally finishing the series isn’t what I found life-changing about this book. I actually finished reading this on the night after I went through a really bad breakup. I was feeling pretty upset at the time, but reading this book instantly lifted my spirits, and made me feel at home in the pages. It helped me overcome the intense feelings of sadness and solitude I was experiencing. As Dumbledore says, “Happiness can be found in the darkest of times, if one only remembers to turn on the light.”

What Happened by Hillary Rodham Clinton

Put those picket signs and pitchforks down, people—I’m not here to make a political statement. I’m just here to say how much I enjoyed this autobiography about Hillary Clinton’s personal life, political pursuits, and eventual bid in the 2018 election. First of all, it was incredibly interesting to read the events of the election through her viewpoint, especially considering there was a lot of controversy surrounding her campaign. However, I found this book life-changing primarily because of how inspiring Hillary really is. Whether or not you agree with her politics, you have to admit—it’s pretty damn cool that she was the first female nominee in our country’s history. Reading the passion and dedication she throws behind her beliefs and actions was a real motivator. She made me understand just how much power I have as a young woman today in the United States, and how my fight is also the fight of many others.

Check out some other books I found life-changing that didn’t make it on the list:

–To Kill a Mockingbird by Harper Lee

–The Fifth Wave by Rick Yancey

–Simon vs. The Homo Sapiens Agenda by Becky Albertalli