Lately, a lot of YouTubers have been writing books. (Click here for my Atlas Online article about YouTubers branching out.) While I had heard of a ton of YouTubers coming out with books, I never bought one because none of the YouTubers who had released books were YouTubers I really followed closely.

When Connor Franta announced the release of his book, A Work in Progress, it was the first time I became very excited about a book written by a YouTuber. I’ve followed Connor for around three years, so when he announced that his book was coming out, I immediately preordered it and eagerly awaited the day it would arrive so I could read it.

I was a little skeptical. I wasn’t sure what to expect. Connor said that the book would contain a lot of his photography, so I was excited about that. Connor labeled his book as a memoir, which he himself said might raise some comments from people since he is only 22 and most people write memoirs later in their lives. I decided to keep an open mind about it and see for myself.

The book itself was visually stunning. The cover was simple but beautiful, and the inside cover had pictures that Connor took himself. The entire book had pages that had his photography, and there was even parts with letters from his parents and drawings from his childhood. I liked that it seemed very true to himself. He wasn’t trying to put on a certain appearance to appeal to a different audience.

I am constantly aware that while I’ve followed Connor and other YouTubers for a few years, and feel like I know a lot about them, there is so much about them that I don’t know. Writing books for a lot of YouTubers is a way to expand their platform, but to also reveal more about themselves to their viewers.

I learned a lot about Connor that I already knew, like how he grew up in Minnesota, has three siblings and was part of a collab channel called Our 2nd Life. But I also found out things I didn’t know about him. I found out how he hated being prom king, he went to an elementary school where there were only five kids in his class and he often felt like he had to pretend to be someone he wasn’t.

A few months before the book came out, Connor made a “Coming Out” video. This has been a thing that I’ve seen a lot of YouTubers do. They come out to their friends and family, and then when they’re ready, they come out to their audience. YouTubers connect with their audiences so often, that a lot of them want to make an official video to let their audience know an important part of their lives. It’s a very uplifting thing to watch these videos, to see a lot of them crying and getting so emotional, and yet looking so relieved that this part of them is out in the open. Connor wrote more about how he figured out he was gay and how he suppressed it, but then how he later came to terms with it. It made me cry because it was such a vulnerable part of himself that he was sharing and it was a very emotional part of the book.

Connor has always had a very bubbly personality on camera. His videos make me smile and cheer me up. His book made me laugh and it made me happy, but he also shared stories and pieces of advice that made me realize that he is a real person who is very wise for his age.

I read the book in one sitting. I sat down one night and did not do anything else until I was finished with it. It was a pretty quick read because of the pictures and different formats some of the chapters took, but it was also a very interesting and captivating. I normally read fiction, but I sometimes enjoy other genres if they’re written the right way. Maybe I enjoyed it because I watch his videos, but I also feel like this can be read by people who have never seen his channel. The book was smart, beautifully written and visually pleasing. I think that readers of all demographics can really enjoy this book. 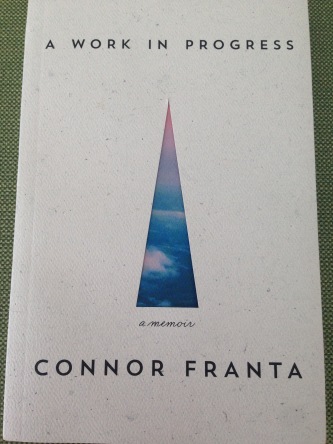 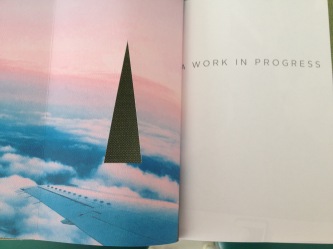 The inside front cover.

Some of Connor’s schoolwork included in the book.

A letter from his mom. 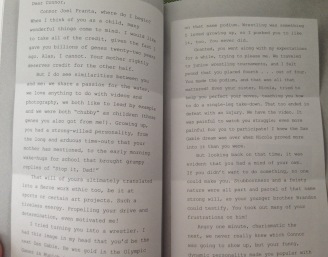 Part of a letter from his dad.

The inside back cover.