On Saturday, May 30th, the leader of the party Voluntad Popular (VP), Freddy Guevara, shaved his head as a gesture of opposition to Nicolás Maduro’s government in Venezuela. This gesture was also in solidarity to Daniel Ceballos, ex-mayor of San Cristobal, who is also among the leaders of the opposition and was recently transferred to a prison for common criminals and had his head shaved. Leopoldo Lopez, ex-mayor of Chacao, is also another opposition leader in jail who has had a major influence on the protests happening over the last year in the country. Lopez called upon the peaceful protest from jail and has been on a fasting protest until he is released. Around 20,000 people were out on the streets in Venezuela on Saturday protesting against an oppressive government and calling out for immediate release of political prisoners.

But, all that I am telling you right now you can hear and read from the news. And the news are currently not enough to really expose the truth behind Venezuela and what is really going on in their streets. This is why I turned to my Venezuelan friends, all students from Emerson College, who can really open our eyes about the situation in their country.

When did you leave Venezuela?

“I left for college four years ago when I was 17.” –Ana Karina Vivas

“I left Venezuela eight years ago, when I was 12 years old.” –Lui Fenty

“I left when I was 17, straight after graduating high school in 2011. So, four years ago, give or take.” –Jonathan Beker

How was the country changed since you left?

“I went back for the my first two summers away and for the holidays. However, I haven’t been back in almost two years. The last time I went was the time I saw Caracas at its worst. The violence was unbearable, the prices had increased so much over the last years, you could see the poverty everywhere, and people were desperate. I think that the worst thing that has happened to us is losing our faith. You can see the hopelessness just by driving around the city. People are tired. People are tired of this 15-year-old regime.” –Ana Karina

“I go back a few times (two-four) each year. It’s changed a lot in the past four years. The insecurity that was always present during my growth is now even more prominent and menacing. The streets are empty by night time. On a more personal level, most of my family emigrated, except for my parents and grandparents who are “stuck” there because of their job situations. All of my friends left to live or study abroad. The way people speak about the future and the socio-economic and political situation in Venezuela is starting to be completely pessimistic, when not too long ago there was optimism in people’s opinions.” –Beker

Is your family still in Venezuela?

“Yes, my whole family still lives there, as well as, most of my friends who decided to stay for college. This is the hardest part about moving here. I know I’m safer here but my family is still in danger.” –MJ Paoli

From your perspective, what is happening in Venezuela right now?

“What I see and what affects me the most is the economic problems Venezuela has right now. It is impossible to find basic products like deodorant, shampoo, toilet paper, even things like tampons and condoms are now hard to find.” –MJ Paoli

“People in Venezuela are desperately in need. For a long time, we’ve had been living in a social turmoil. However, after Chavez died, a lot of things changed for the worse. Even though it is technically the same government, Chavez was a father figure for an important part of the country. After our last presidential elections, we, as a country, were more divided than ever. The biggest thing right now is the shortages and the economic crisis. Our currency exchange system is a failure, and people are suffering. It almost seems like what once seemed like a good idea turned into a 15-year-old disaster. And now, it’s very hard to get out of it.” –Ana Karina

“There were huge marches and manifestation, the biggest I have witnessed. They began peacefully, but the government used force to ‘calm the situation,’ which resulted on the people growing more agitated and wanting to protest even more against this clear dictatorship that is hiding under the name of socialism. The government also imprisoned people for non-specific reasons. For me, the decisions committed by the government in the past year fulfilled and publicized the true nature of dictatorship that this government really holds. The cherry on top is the economic situation and incredible inflation that the lousy economic decisions of the government, such as nationalization of many companies that resulted in their destruction, has created.” –Beker

What is the most detrimental aspect?

“The fact that the international community knows so little of what actually is going on in Venezuela.” –Lui Fenty

“The party in power now will always find a way to cheat and lie and make themselves the only ones with power, as they have been doing for so long now. We can’t count on elections since they are always rigged, we can’t protest because we’ll be put in jail or worse, killed. I don’t see how other countries can help us. It is sad to say this, but after so many years of fighting I feel like I lost all my hope for my country. Since Leopoldo Lopez was put in jail I thought this is it there is nothing else we can do, they have all the power and can do anything they want.” –MJ Paoli

What is something about Venezuela that the media has not been talking about or showing?

“The media rarely mentions the goings and comings of a group known as ‘The Colectivos,’ an armed, pro-government group that to this day, intimidates and often ‘kills’ protesters but are never arrested, nor prosecuted.” –Lui Fenty

“In a country where there is limited free speech and free press, it is very hard for us to show our reality to the rest of the world. Most importantly, it is very hard when a lot of people just don’t care. We’ve been in this for the past 15 years. It is crazy to think that some people still don’t know what is going on and how this government is a threat in the global sphere. Since Chavez came into power, a lot of Latin American countries have taken after his socialist system.” –Ana Karina

What is something you think the world should know about Venezuela?

“The world should know that Venezuela is as democratic as the sun is purple. Venezuela is not a democracy, and also, not a true socialist state.” –Lui Fenty

And most importantly, what makes you a proud Venezuelan?

“Our culture and personality. Behind all the ugly traits that makes Venezuela’s façade: the insecurity, the economy, and the government’s bad decision on who to friend and help. Venezuelans have a beautiful and friendly personality that is unique, and such is the country itself: An ugly façade, but the inside is a country that holds all types of environment, from snow to desert and from beach to jungle, a true buried treasure.” –Beker

“I will always be proud to be Venezuelan because it is a beautiful country with amazing people. There is nothing like Venezuelan beaches or Venezuelan food, and everyone is so friendly and happy even in the hardest of times.” –MJ Paoli

“Many things, from our beautiful landscapes, to our rich culture, there are many reasons to be a proud Venezuelan. But the thing that makes me the most proud is the fact that many students, my age or even younger, sacrifice themselves each day to fight for my future.” –Lui Fenty

“I believe that when your country suffers, as mine has, our love grows even bigger. I am so proud of being Venezuelan and so proud of my Latin culture. Every time I hear a Venezuelan accent, I turn to the person and talk to them. My goal is to go back with all the tools gained and experiences had here to start to help restoring our country and our society.” –Ana Karina

There is still much more to be known about Venezuela, its current situation and where it’s heading. Still, I can say that Venezuela is a country that requires international attention, its people require our empathy and love. In their displacement, we should help them find a temporary home, raise awareness for their country and by showing our support, make them realize that their fight is not in vain.

Next time you read the news about Venezuela, know that there is much more to it. Instead, approach a Venezuelan and have them tell their story. Venezuelans are probably the nicest, most charismatic people you will ever meet. It is much more valuable than anything that comes from a country where its people and press are censored, and human rights are disposable.

Thank you to my friends who were willing to share their stories and opinions. You are already amazing leaders. 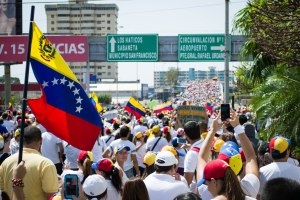