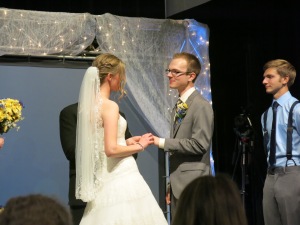 Though I’m closer with the bride, I watched the groom’s face when she appeared and as she walked down the aisle. Juliane: cool as a cucumber. I unintentionally cheated and got a sneak peak. I saw her being driven up to the church and watched her step out of the car, looking perfect and casual in a dress I’d only ever seen on a hanger in her sweet, homey apartment. Alex: as in love with her as we, his friends, knew he had always been.

I could only imagine how they were feeling as I observed the ceremony, connecting my past with theirs. I wrote it in the guest book. I am one of the lucky ones who got to see this relationship from the beginning. We were in Emerson Christian Fellowship together, back when I had my life together. There was a whole gang of us but sometimes it felt like the three of us were the Three Musketeers. Even before they started dating, I never felt like a third wheel. We planned a trip to New York together. I still joke with them about saying it was too expensive to go and canceling the plans. A couple weeks later, they started dating and they went without me. I’ve still never been.

Their relationship has paralleled mine with my boyfriend. In fact, it has sometimes even been perpendicular. But we all began our romantic relationships the same week in December 2011. Our friends and I had badgered them since they got lost in the woods at a weekend retreat the first month of school. Alex was leading Juliane and her roommate to the girls’ cabin but it took them hours to find it. Even though they had a chaperone, all of us always thought that this was their great beginning. The two of them ending up together was bound to happen, written in the stars above Lake Winnipesauke. We all knew it.

As I watched them exchanging vows, I couldn’t help but think about myself. I knew from that morning it was going to be a hard day. First, planning to get to Plantsville, Connecticut was a struggle. I’d just had to pay rent and wasn’t getting enough hours at work, so taking a bus wasn’t an option. In the end, I took a train to Worcester, where I met up with my boyfriend who drove me to Hartford so I could meet up with another friend to drive me the final 20 minutes to the wedding venue. That was another adventure. No one in that car knew each other. One guy knew Juliane and Alex from Wildwood, a summer Christian outreach program in New Jersey, and the other girl had just flown in from London but had gone to high school with Juliane in California. We all clearly had a lot to talk about.

Second, I was awkward around her mother. I joked later, saying to Leslie, “Never make the mistake of calling a German woman ‘Mama Bear.’ She didn’t find it amusing.” This is only my second wedding since losing my mother, and I couldn’t help but be jealous of Juliane and Alex’s big family. Writing this article, I’ve had to tell myself not to let the article become about that loss. As hard as weddings are for me knowing I won’t have my built-in matron of honor, my love and admiration for the couple does not waver. The hope the day brings for the future outshines any sadness I could ever feel.

When we got to the church, I ended up being a sort of tour guide for Leslie, who didn’t know anyone but the bride and her family. Alex’s best friend Stephen escorted us to our seats. When he asked which side, I got overexcited. “I can sit with them!” I called out when I saw Wes and Julie, some old friends from church. Until the ceremony started, Leslie and I talked, listening to the soft piano music playing once in a while.

I figured I would be a wreck. When Juliane and Alex announced their engagement I immediately started crying. Seriously, it was like Niagara Falls met my face. We were at Juliane’s apartment, “The Port,” for a surprise birthday party. When Alex escorted her in, we all yelled, “Surprise!” and Juliane was surprised. But not as surprised as most of us were when Alex said, “We have a surprise for you,” and Juliane held up her ring hand, which was sporting a solitaire diamond. Yet at the wedding, I did not cry. For the most part, the event went as planned. I learned from a bridesmaid that the only mistake during the ceremony was that her guitar was missing its strap. I watched as she gracefully found a chair and sat to play “In Christ Alone” near the end of the wedding. Then later, at the reception, all of the wedding party’s names were announced wrong. Elise became “Elsa,” and none of the groomsmen were announced as themselves. The kicker was when he called out “Mr. and Mrs. Andrew Steven Hoder!” A beat later, the man, who we later learned was Alex’s uncle, corrected himself. Juliane and Alex, the picture of young grace, just laughed.

A few nights ago on my way home from work, I ran into a couple of people from Emerson on the T and I told them about the wedding. They were intrigued. The first thing anyone from our school does when they learn about Alex and Juliane getting married so young is express surprise. In both American and Emersonian culture, getting married at our age is not normal. They haven’t graduated; they’ll be attending Emerson LA in the fall. “Will he be her RA?” one of the bridesmaids jokingly asked months ago. “How is the sleeping situation going to work?” The girl on the T wondered aloud. I have faith in their relationship; it has been wonderful watching them toss the dice and go all in.

I always thought of marriage as this end-of-the-line, after-the-wedding entity but dancing with them to “Love Shack” and “Turn Down for What” at the reception, I learned that I have not lost my friends to some big scary thing. Our relationship can grow again. This time it isn’t New York but the world they’ll take by storm and I still get to watch and admire them, learning how to be successful in a relationship of my own. My favorite part is that they’ll be living down the street from me this summer. We may never be in the same place again but during my first and last summer in Boston, I get to be close to the people who have been there with me from the beginning.